Online Lecture: Storm of the Century 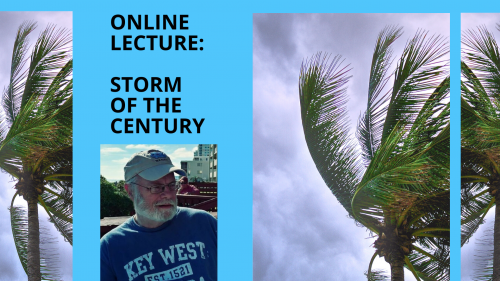 Join award-winning author and journalist Willie Drye upon the 85th anniversary of the Labor Day Hurricane as he compares Irma and other infamous Keys hurricanes to the all-time monster storm that blasted across the Keys in 1935. The recent, updated edition of Drye’s classic book, “Storm of the Century: The Labor Day Hurricane of 1935,” includes a detailed chapter about Hurricane Irma, as well as discussions of other devastating hurricanes. Email caria-charlotte@monroecounty-fl.gov for the Zoom invitation to Drye’s presentation.

In early September 2017, Florida Keys residents watched Hurricane Irma’s rampage across the Atlantic with growing alarm. The storm had become one of the most intense hurricanes on record, with peak winds that reached 177 mph at times. The hurricane methodically shredded everything in its path as it approached the Bahamas and the Straits of Florida.

The hurricane lost some of its intensity as it came off the coast of Cuba and turned toward the Keys, but its peak winds still exceeded 130 mph when its eye came ashore on September 10 at Cudjoe Key. Irma covered much of the Middle Keys in saltwater, and its winds devastated entire neighborhoods on Big Pine Key and elsewhere.

Hurricane Irma was a storm for the record books. It was the seventh-most powerful hurricane to form in the Atlantic basin. It killed 134 people—including 92 in the U.S.—and inflicted more than $77 billion in damage.

Yet as savage as Hurricane Irma was, it was not the most powerful hurricane to strike the Keys. That distinction belongs to the Labor Day Hurricane of 1935, which came ashore in the Upper Keys on September 2, 1935. The Florida Keys were remote and sparsely populated at that time, and the hurricane might have been forgotten had it not killed hundreds of World War I veterans working on a New Deal construction project in the Upper Keys. More than 250 vets were killed by the hurricane’s 200 mph winds and 22-foot storm surge.

Drye will discuss all this and more during his fascinating presentation. We hope you’ll join us.